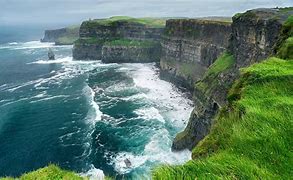 Shannon river is stretching his blue-green waves in large curves in front of a door of God, the monastery of Clonmacnoise, Gaelic language for “The farm of Noah’s sons”. I will never forget that sense of peace and beauty of central Ireland, renovated in every trip to this green pearl of the world. First time I arrived in 1971 and walking around in Dublin lazy as a tourist, in shorts and shirt, my attention was attracted by a small signboard “IDA” on a building, staying for Irish Development Authority. Remembering our Southern Cassa del Mezzogiorno, distributing billions with obscure procedures and generally not effective on Italian economy, I ringed and asked informations. A perfect gentleman invited me in his office and for three hours explained to me how to invest in Ireland, all the State incentives, the best areas to go, the educational system and so on. This old anecdote because from that moment I understood the enormous potential of Irish people, notwithstanding the really poor conditions of the population and structure of the Republic, also confronted Italy, certainly not a champion of social performances. In the same trip I was in Belfast driving among English bullets and soldiers around. Then I returned from time to time, measuring the constant progress of the country, becoming the Celtic Tiger in the 90’s. In those years I had another big opportunity to understand, studying for Genoa technological park the Limerick University park case.

During an unforgettable conversation with a Vice-minister of Economics, he explained very openly to me the three Ireland strategic choices for the enormous development of those ten years:

This is vision and clear strategy: investors arrived from all the world, opening firms especially advanced technological ones near to Irish Universities (famous the Dell case in Limerick) and fiscal policy was also very supportive for multinational headquarters (12% income tax). So from 1995 to 2005 the growth of Ireland has been between 7% and 10% of GDP yearly, putting the country in the leading group of Globalisation in industrial development (40% of GDP) and financial sector. Geopolitical position improved a lot, through new relationship with old enemy UK, big support from USA and one of the most internationalised economy like that of the other small countries, leaders of market integration. Irish Catholicism finished to be a trade mark of poor conditions and became more attractive also for protestants people.

The Lehman crisis hurted a lot Irish economy in 2007 and a package of helps of 85 billion $ was invested from IMF until 2011, wit unemployment and again emigration of 2,5% of young people like in the UK times, but export industry remained strong, and in the last ten years again Ireland recovered economically and socially like in the 90’s, reaching again outstanding performances. GDP per capita is today about 75000$,and depurated from the multinational income not remaining in the country, remains around 44000$ in front of Italian 33000$. Everyone can see this unbelievable change visiting a vibrant Dublin, now a preferred target of young Europeans. Geopolitically Ireland will be accepted in the Anglo-sphere strategy developed by Boris Johnson after Brexit and a reunification process with North Ireland is also probable. Celtic Tiger is roaring again.