One hundred and twenty years ago Alfred Thayer Maham, teacher in US Naval War school in Newport, displayed a complete maritime strategy for USA, imitating UK policy under Victoria Queen, for dominating the world through the sea control and a ring of naval basis along islands and countries all around the Heartland of Mackinder, theory emerged in the same period. In the thirties Nicholas John Spykman rebalanced Mackinder approach, formulating the concept of Rimland, a maritime ring around Eurasia continent to counter balance the terrestrial powers like Russia and China and eventually projecting military actions from the sea to the continent. Reading now the Maham articles they seem prophetic regarding the future emerging role of China in dominating Eurasia and certainly these two authors are very studied in Chinese Marine Schools, observing present and future civilian and military strategies of China. I analysed in a previous article the Chinese interest for improving control on Heartland through Russia cooperation, forced by clear mistakes in USA international policy. Here I will display some facts in logistic strategy of China, structurally supporting Chinese economy dominance and every future military deployment.

Here we have a map of world harbours participated from China in property and management, sometime also with Chinese manpower employed, presented in the annual Lloyd Report on container seaports of 2017. 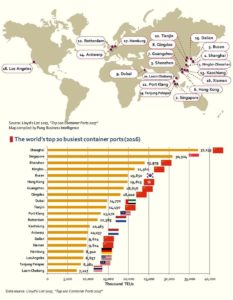 The map is self-explaining, but we can add some comments:

A counterbalancing strategic approach could have been deployed only through an alliance UE-Russia, the traditional enemy of UK empire, at those times Germany-Russia cooperation, which UK strategist always avoided with full success. USA is trying always to copy a century after the role of UK, but this attitude against Europe risk now to create a Russia policy concentrated on Eurasia and Artic positioning, and this for insufficient Russian resources and demography problems push automatically in favour of Chinese repositioning on terrestrial and maritime dominating vision. We don’t have so much time to avoid this cooperation becoming really effective, reducing space first of all for UE and then for USA. In this geopolitica context only Japan and a new reunited big Korea can be fundamental basis for the Western Maritime Rimland. The same role in Middle East should be exercised by Israel and Saudi Arabia, reducing Turkey and Iran power policy, probably in the future objectives of China penetration through Kazakhstan. 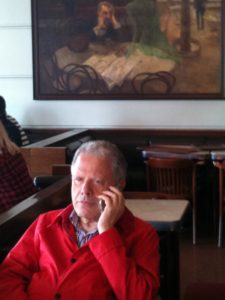