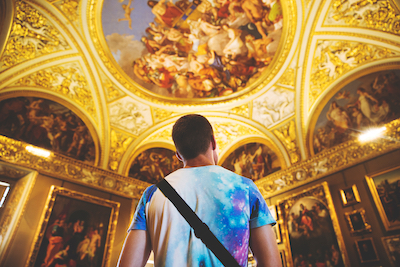 LOOKING AT GLOBALIZATION FROM VENICE BIENNALE

Biennale (every two years) is the periodical review of the status of contemporary art in the world by nation, hosted in beautiful pavilions builded in the thirties in Venice and in the big site of Arsenale a shipyard of 1700 having at the time 20000 workers for building and maintenance of Venice fleet. Pavilions are inside a nice park on the tail of the “fish”, urban form of the city. and Arsenale is quite near surrounded by the original walls with a large harbour inside. Also the architecture of these pavilions  is remarkable, representing in those years the style of every country.

In every time Art and Literature are forecasting future sometimes better than scientists or engineers, through the intuition of the artist. Impressive the Egon Schiele paintings in Vienna, where the artist transmit ten years before the tragedy of First World War the sense of fear and uncertainty in a very happy society, which went to the war suddenly, without a clear pattern. The contemporary art enphasizes from many years this intuition of the trends in the culture of the worlds and anticipates the major vision of the future. So I use to visit Biennale to better understand where I am and what will be the change processes to the future of society.In 2016 for example environmental problems and biotechnology new frontiers were largely represented, generally with a correlation between the urgency of a new trend with the economic and social degree of development of the country. So USA, Japan and Israel are piloting science major changes, Scandinavian countries and Canada concentrate on environment, other less involved in globalisation represent local culture debate or more “traditional” approach to contemporary art tendencies.

In contemporary Art some major currents can be identified:

So the most advanced countries artists explore the impact of some new technologies or materials on their work, the most conservative approach now some of the previous themes already developed in past years.

This year Biennale was more globalised than in the past, with a lot of artists from Arab countries, some of them working in Western countries, other in Emirates, and more contribution from Africa, Nigeria, Congo, and the classical nations always represented. The major incumbent themes for the future envisioning seem to be migrations of people, war and power, man-machine integration, environmental problems remaining on the front also as in previous year. Most surprisingly is the poor innovation from European nations, where Germany is a large platform of glass with nothing to suggest, France musical instruments, Great Britain gigantic theatrical scenes. USA presents “old style” abstract masterpieces remembering Pollock informal of the fifties. Israel also return to biblical scene and in another section stressing pollution problems on buildings.Japan a bit regressing to children vision of the world, the same in Finland.

The most impressive installation on masses society, power and war are realised in Russian Federation pavilion, with a 360° video based on cartoons simulating masses in march, the emergence of leaders and show artists from the crowd and the passive following, sounds of war and planes bombing, man/robots creatures moving.So a quite pessimistic vision of the future but very stimulating thinking. About new techniques and materials superb realisations of Chinese artists, bridge from old porcelain to future ceramics evolution and their combination in new shape and context, like a big Square realised in Arsenale. Among Arabs artists remarkable in Italian pavilion Marwan from Syria working in USA figurative, in the line of Bacon heritage with formed faces of people. Also from Scandinavia no surprising news, but very large installation in steel.

So from this observatory we can testify that globalisation proceed through a better integration of South of the world culture with the rich North of Europe and America. Some very nice surprise a video installation in Italian pavilion from Daghestan, caucasian Republic of Russian Federation, in which emerges the big theme of invisible art masterpieces, accumulated in the large warehouses of major world museums.A famous cirque artist of Daghestan transport in equilibrium on a rope between two beautiful peaks of a local mountain a lot of invisible paintings from a rack in a deposit to the light of exhibition, simbolizing the real big problem of invisible local art. An idea of beauty transforming a real problem in very pleasant emotional experience. And also a hope for a future of beauty after the uncertainty coming from technology and politics.