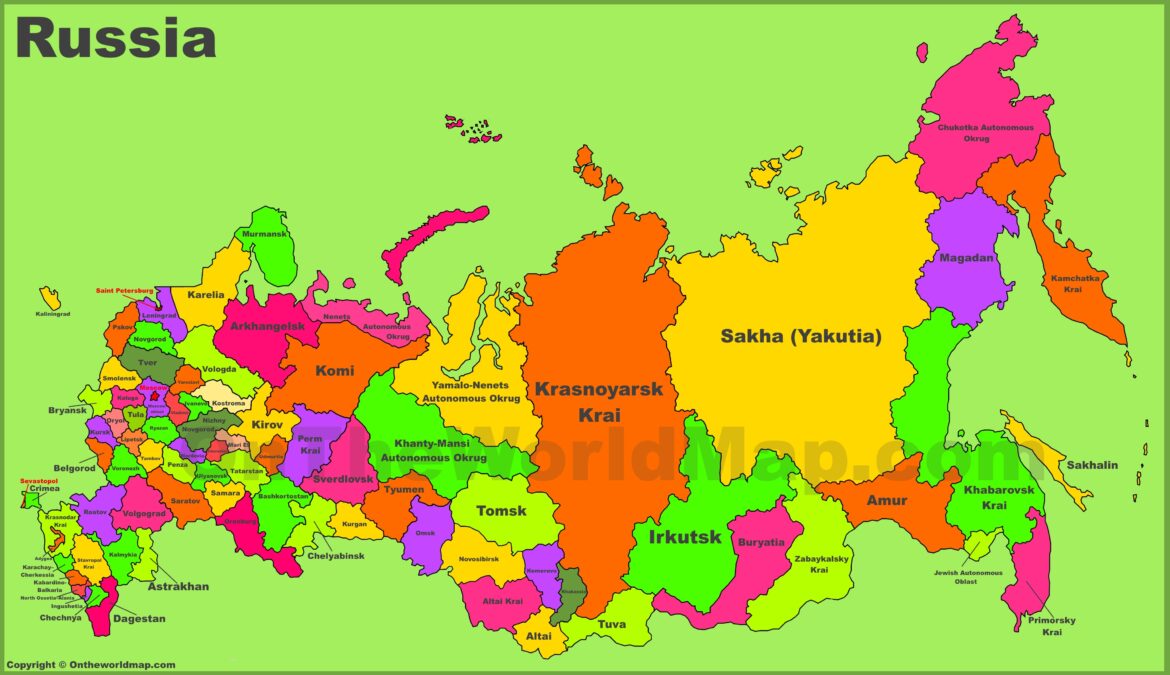 Russian Federation, 17million square km (1,7 times USA), about 140 million inhabitants, is the largest State in the world, even after the dissolution of Soviet Union, which was quite bigger with 22 million square km and 286 million of inhabitants. Today the Federation has 21 states, versus 42 in SSSR, and being so large, with 10 hours zones, periodically ,and now particularly due to Ukrainian war, there are general discussion about a possible breakdown, which is also in the fears of Putin. Recently Prof Parsi of Catholic University in Milan proposed a breakdown following a concept of de-colonisation, similar to processes seen in Africa in the sixties. Of course it’s easy to think of a possible dissolution of RF similar to SSSR, but from the ethnic point of view now the Russian component of population is 78% versus 64% previously present and the real difference is clearly present only in Caucasus region, with its muslim variety of ethnic and language groups.

According to Russia 2010 census data, 77,7% of its population identify as ethnic Russians, the other 22,3% being very fractioned , the majority of them are as follows:

There are other extreme minority indigenous groups in Siberia, Altai mountains and Yakutia.

In this present situation it’s difficult to see pressures of decolonisation from oppressed groups sufficiently organised, taking into account that all the ‘STAN republics born from the dissolution of SSSR, remember with favour the status of civilisation created from Czar empire and SSSR in infrastructures and well being of populations, having nomad and tribes traditions, to which some of them returned.

The real danger is what I would call the EMPTY versus the CROWDED territories in Asia. Travelling along Trans-Siberian railways from Pechin to Moscow, you can easily verify hundreds of villages abandoned after Ural mountains from people which went to Moscow (30 million) or Saint Petersburg (10 million). The big Siberian cities are very, nice, active and worldwide connected like Novosibirsk a scientist international city, or Krasnojarsk or Irkutsk, so full of Czar remembrances. But coming from China so crowded also in small villages, crossing an empty and wonderful Mongolia, you arrive in an empty Siberia, so it’s easy to imagine a future of Chinese immigration and a levelling of the two cups, one so empty one so full.

Russian Federation has enormous margin of development and possible integration with Western Europe and with Asia exploiting the big natural resources of Siberia in cooperation with the most rich and technological advanced countries. It is a natural bridge to deep Asia, with big cultural roots in Europe, on the pattern of Peter the Great. Of course there are in Warsaw groups and committee for the freedom of ethnic groups inside Russia, but the number reality can only forecast a possible rebellion of Caucasus with Saudi money, being the others minorities dispersed and economically sufficiently protected by welfare of SSSR heritage. If Russian culture will at least overcome the complex of a Great Power surrounded by enemies of Czar heritage, a big future will open also for those beautiful and difficult territories crossed by enormous rivers from South to North, which the Federation alone probably can’t develop without foreign capital investments from China and USA.