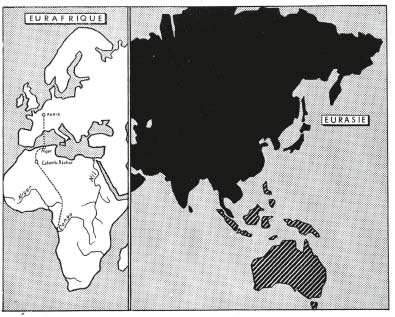 Geopolitic proposed the Eurafrica concepts in the 20ties of last century, mainly through Germany’s geographer Haushofer, and French and English scientists. In Italy from the main geopolitical school of Trieste, Ernesto Massi and others. The basic idea was that America and Asia were markets for European export, but the best situation of complementarity between two continents economies was between Europe and Africa, being the first on top of transformation technologies, the second with enormous richness of raw materials. The idea was later considered as too much connected with political dictatorships exploded in Europe in the following years and reflecting a colonialist approach of the previous century and the last form of colonial effort from fascist Italy. So all focus of international trade was switching after the second world war to Asia and USA, and after the de-colonisation process, Africa has been quite abandoned from Europe, probably for embarrassing past of colonisation. At present days on 2 trillion of export of EU in the world, first exporter, only around 6% of this figure regards Africa trade of goods, and Africa remains with an enormous potential, well studied and utilised mainly by China, but also from France,Turkey and Russia. With 1,5 billion of inhabitants, becoming 2,5 in 2050, the richness of this market remains untouched, so as the big assets in raw materials, old and new minerals. Take note that Africa is 30 million square km, the sum of Europe, China and USA territories, so that in 2050 people density will remain similar to South of Italy, which is more and more empty. In the following image you can see infrastructural ideas for African railway network proposed in the 40ties in Italy.

Now probably Chinese are applying these ideas, in the East and Center of the continent, according to their OBOR strategic initiative. By the way the trade balance of EU with Africa has constantly a surplus, peaked to 33 billion $ in 2017 and now around 4, but Spain and Italy have a negative balance around 6 billion each, and they are the most near countries to Africa! Focusing on the necessary redesign of international supply chain after the war in Europe and potential conflicts in Asia, we should reconsider the Eurafrica concepts, beyond any thinking of colonisation but with an openminded attitude to economic partnerships. Of course as we mentioned in previous article maybe it’s too late considering big investments of Eurasia (China) to include Africa in its economic space. But the potential of 54 African States, with a growth of 5% in GDP, some of them being already at Mediterranean income per capita, it’s so big that at least other twenty years of development of new European positioning are available. By the way also USA lost terrain in Africa and tries to revitalise its presence through South Africa Republic.

From another point of view, the demographic one, more than Eurafrica, we could speak of Afreurope in the near future, if the immigration flow from South to North will continue. In the recent numbers about European demographics , the European population of 446,8 million is already peaking and will decrease to 441 million in 2050 and 416 million in 2100, quite a decreasing like a half of France. Of course the lack of human resources will be particularly heavy in specialised profession not substituted by present low education immigration. It’s also probable an automatic flow reduction in the medium terms, because of African accelerated development. We are needing India electronic engineers, but India now doesn’t want to lose brains. So will be for African emigration, as more and more they will understand the reducing potential of European economies. In any case this is a possible scenario that European governments should consider for the future.