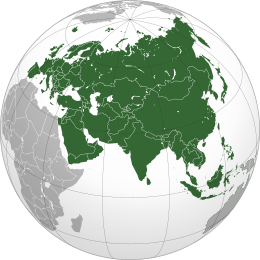 Hundred and fifty years after Harlford Mackinder the “heartland” is here very present and vital, Eurasia seems to be the main actor of future order. Russia/Ukraina war accelerated the trend toward a new world order more balanced between less developed world and the traditional EuroAtlantic rich club, The weaknesses of EU community, never building a State, and the USA policy of pushing Russia toward China separating it from Europe (Germany), re-launched the potential of Eurasia integration, strongly supported by the Chinese strategic initiative of One Belt- One Road, from 2016. Socio-economic Data (2022) are self-explaining:

So the potential union of Europe and Asia produces 2/3 of world GDP, with a total population of 4,7 billion on a total estimated in 2022 in 8 billion. But the term Eurasia is not completely significant, because it keeps on an Eurocentric vision, so I propose here to talk about Aseurope, which by the way I discovered is a name of a Spanish IT company which I hope to not disturb. In fact if we look about the trading data, which express a synthesis of competition and power relationships among countries, Asiatic nations, first of all China has already the leadership in trading balances of all the States in the area, having also with EU an amount of exchange of 700 billion $, with a negative balance of 300 for EU. China is the third largest partner of EU for export and the first one for import. USA has a volume of exchange with China of about 400 billion $, with a negative balance of 200.

So USA left to China the heartland and China according to Mackinder theory will dominate the world, and we must speak of Aseuropa to understand better the reality. Now the Anglosphera is re-organising resources and military investments to contain China expansion from the sea, according to admiral Spyke “maritime ring” theory. In this effort USA try to involve the more maritime powers of EU, i.e. UK and France, so as the QUAD nations Australia, New Zealand, Japan, USA. China has been also constantly investing in military area, reaching a fleet larger than USA now, but its strategy is to keep on peace and globalisation , framework like WTO which assure its hegemony on business and economic areas. Within its strategy present war is disturbing, so China will try to stop Russia, notwithstanding its short term interest in absorbing Russian resources and territory in perspective. I

Italy, normally very ready to nothing, losing every day control in African chaos starting from Libya, more and more depending of Turkey initiative in rebuilding Ottoman Empire, with poor control of Sicily channel determinant as a passage Atlantic- Pacific as Suez, must balance its survival between Eurasia attraction and Eurafrica geopolitical destiny (or Afreuropa?). Our Genoa and Venice history should orient us to Asia and some step to OBOR have been done three years ago. But our maritime present weakness due to the Piemonte driven unification process, leave us with high probability to Africa, were a lot of competition with China and Turkey and Russia will create also difficulties for us. Main objective should be to forget to be protected by a not existing Europe, and take again our destiny in our hands, remembering and understanding the forgotten basics of Italian Geopolitics.