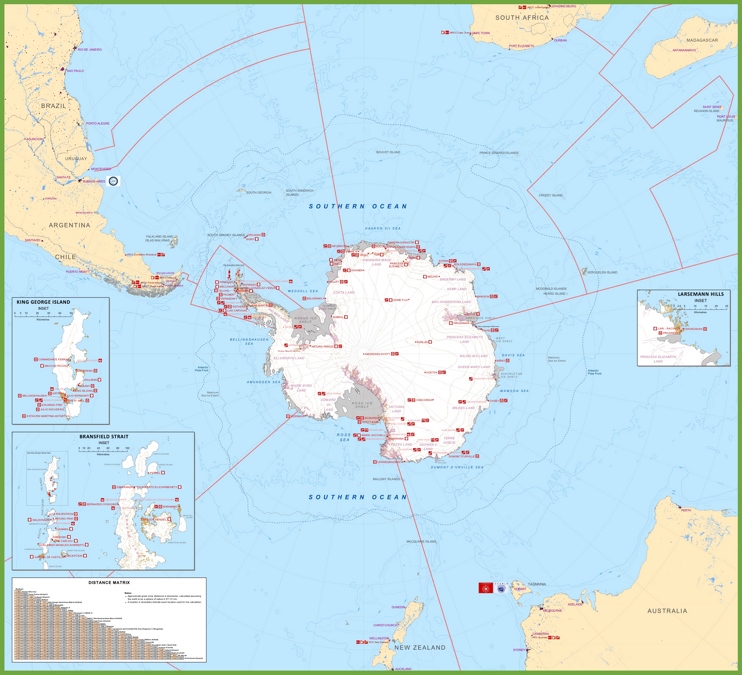 Due to the accelerated world order change, we must start to look at the world from Antarctica, leaving the more classical North Pole view, in any case more correct then Mercatore perspective in mapping the planet. The last one is reducing size of Africa continent and expand European one. Looking from Antarctica we find on the west side Argentina quite touching Antarctic peninsula, but the power we meet is in fact Argen-Cina, because Chinese have a basis in Patagonia at Las Lajas, city of 7000 inhabitants, with 200 hectares of station contracted for moon landing support, practically a black box, which no one can visit. From this perspective one can also understand better the strategical positioning of Falkland Islands and the probable real reason of that war at Tatcher times. Antarctica enormous continent will be perhaps one day be free of ice and for its resources exploiting the present international status of South Pole will probably vanishing. Moving to North we find Africa, South Africa in terms of power. This is a BRICS nation one of the richest of Africa with a GDP per capita (13000 $) of South Mediterranean type, second in Africa after Algeria. Rich in important traditional and new mineral resources, South Africa has probably atomic bomb or serious capability to produce it. This nation will have a key role in the future new order rebalancing Euro-Atlantic countries wit Eurasian and Brics. USA try to attract South Africa in their Anglo-sphere , but it’s not so easy for the historical difficulties with UK.

Travelling in the South of world is magic for similar context of enormous space with few people, wild animals and large horizon. And of course the magnificent Cross of South star at night. Then you go to beautiful beaches and meet very clever seals, a bit tired for swimming from Pole. But let’s return to the map, proceeding to East we meet Madagascar, which from a very quiet and isolated position will come more involved in the new world and then Australia, a key power of Anglo-sphere, of Quad, with a long history of participating to world wars, a traditional culture of courage and combat capability. In the geopolitical repositioning of major nations between Atlantic and Indo-Pacific, Australia last movements are toward a leadership positioning in China containment promoted by USA. They will obtain a small fleet of nuclear submarine and the technology to build them, and notwithstanding an intense commercial exchange with China, they are in Quad, Quadrilateral Security Dialogue, with India, Japan and USA, the most important alliance to be present in China Sea to defend Taiwan, Philippines and Vietnam from imperialistic approach of China. With only 25 million of inhabitants due to lack of water, but with top intellectual and industrial capabilities , Australia is a top player in its Ocean. Of course China is not stopping in opening new partnership in the same area and the last initiative toward involving in OBOR silk ways projects include hundreds of islands autonomous in Pacific, like Tonga, Salomon and Fiji, very near to Australia.

At the end of clockwise looking we find New Zealand, very strategic nation, balancing its policies among USA alliances and China and Japan markets, where quite all meat export is directed after UK entering in EU. The government platform is from one side on the Anglo-Saxon traditions and historical participation to world wars on this side, but also reaffirming the stop to atomics in Pacific islands, particularly in the French Polinesia. France and UK are already repositioning in Indo-Pacific. Will EU evolve to Eurasia? The Orwell “1984” was already speaking of a continuous war between Eurasia and Oceania. is that scenario implemented already with a 40 years delay? We must think and imagine from new perspectives.